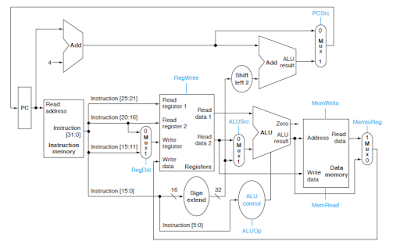 You can also read this article from my LinkedIn here . If you’re not interested in my personal motivation to do this, you can skip right to the Essential Python Background section. Introduction During my last semester, my friends and I were studying a course called Computer Architecture . This course covered topics concerning how a computer processor works and how it is built and wired up internally. As a project, we were asked to build a software simulator that should be given input in the same manner a computer processor is given input, and then it produces the same output as the processor. After a lot of discussion, and despite facing some opposition, we decided that Python was the right tool for the job. The thing is, we had something in mind, that would make the whole process a trivial piece of cake but that something was not offered by default in Python. We had to build it ourselves. I was given the task of making this magic happen and I will explain what this magic wa
Post a Comment
Read more You can also read this article from my LinkedIn from this URL  https://www.linkedin.com/pulse/using-squid-apache-python-develop-captive-portal-solution-peter-emil When I was a student in high school, I was always fascinated with captive portals. It always felt like a super-secret powerful thing to redirect someone’s traffic to a website of my choice. Despite having this weird fascination, I never knew that this was called a captive portal until I went to my network security internship. During my internship, I was introduced to lots of concepts but never really learnt how to combine the ones I need to produce something like a captive portal page. Before we dive into this article you must first Have squid installed and configured as a transparent proxy. There are lots of guides on the internet that will i ns truct you on how to complete this step. Have Apache (or similar) installed and configured to use CGI (in our case, for a python script). [OPTIONAL] Have a local DNS
11 comments
Read more This is an article I shared before on my LinkedIn profile a while ago, but I decided to re-share it on my blog with minor changes. You can find the LinkedIn article here . Introduction I was a new guy to Asterisk. I set up my users, my dialplan and everything seemed fine, until I wanted to let my users connect to my server from the internet. I set up port forwarding on my router, but when I tried to connect from an internet device, nothing would happen. Living in Egypt, I discovered that my ISP is blocking SIP. Attempting to use SIP over UDP port 5060 (which is the default) always resulted in failure. I decided to change the port number, tried again but to no avail. I also tried SIP over a random TCP port but it still did not work. I concluded that my ISP blocks SIP using deep packet inspection. So I did some research, read some RFCs (Request for comments) and I will share here the concepts I learnt and how they helped me get over these restrictions. Please know that thi
1 comment
Read more

June 28, 2017
Hey and welcome to my blog. About Me. I would like to welcome you to my blog. I am Peter, a human being who lives in Cairo, Egypt with a passion for technology. I go to Engineering school at Ain Shams University (for obvious reasons) and I major in Electronics and Communication systems. I like to study a lot of technology related topics like VOIP, Python programming, computer networking and embedded systems among other stuff but I still haven't picked my favourite. I am also quite interested in humanities like history and arts. Moreover, I am huge video game enthusiast. a 3ds max design 2010 certified associate, and have regularly developed personal gameplay and graphical mods for the games I play. My gaming philosophy is, If you can't mod it, don't play it. I am very passionate about what I do and I take it very seriously all the while keeping it fun and exciting. I can't say I will be blogging regularly but I promise to blog whenever I have something int
2 comments
Read more